We inform you that the contract between Karen Muradyan and Ararat has expired.

The midfielder finished his performances in the Ararat. Karen Muradyan joined our club before last season. He took part in 22 matches of the VBET Premier League of Armenia and appeared on the field 7 times in the Cup draw.

Ararat thanks Karen Muradyan for the work done and wishes him success in his future career. 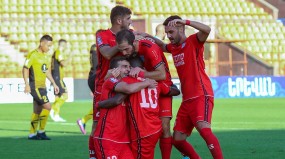